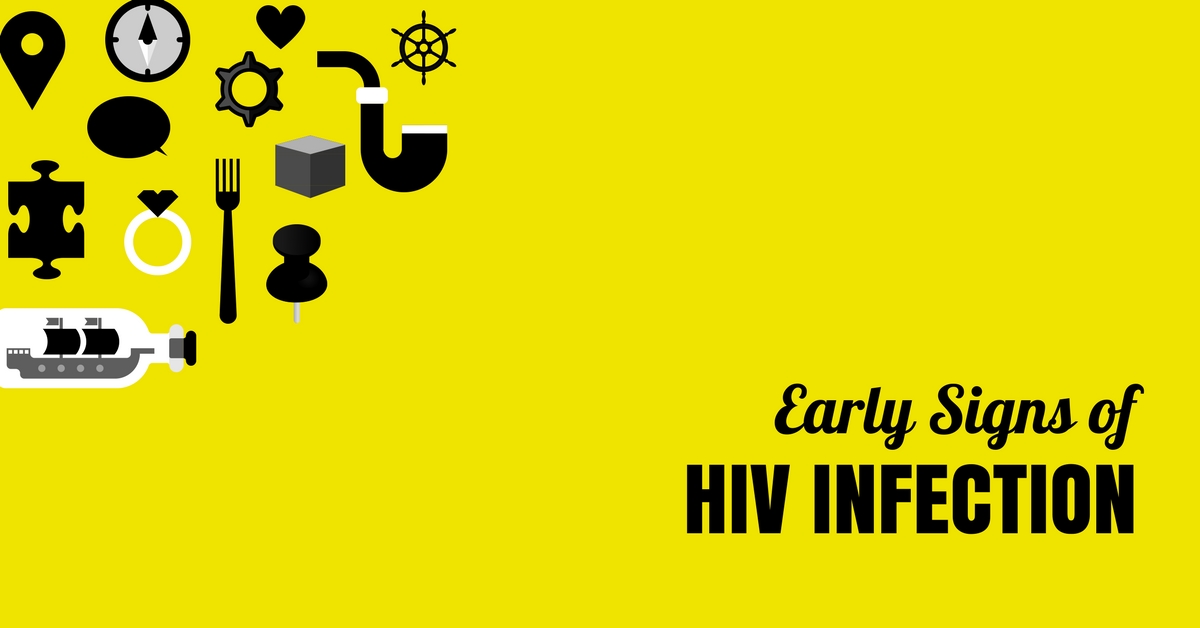 HIV is a disease which lurks inside a human body for months or years and slowly kills the person from the inside. People through the years have become more conscious and have recognized the seriousness of the disease. But still there are a percentage of people who choose to ignore the early signs of HIV further risking themselves.

So in case you are a sexually active person or have had few untimely sexual encounters in the past, then the information curated below can help you stay aware in future or recognize few symptoms in case any and help you get a prompt treatment.

HIV or the Human immunodeficiency virus is a slow eater. If the symptoms go undetected then HIV will mature itself into AIDS which is a more advanced and incurable form of HIV.

Initial sign of HIV is fever which can touch 102 degree F in the thermometer. Often fever is accompanied by other mild symptoms like fatigue, a sore throat and swollen lymph glands. According to doctors, the infection at the initial stage of HIV will move into the bloodstream of the body and will start to replicate itself in large numbers. This further leads to generation of an inflammatory reaction by the immune system.

Seroconversion is often misunderstood as temporary diseases like viral infection, syphilis or even hepatitis. Since plenty of the symptoms are the same, like the pain in muscles or joint pains, chances are that they might get unnoticed by anyone.

A corrupted immune system will make you feel more lethargic and dull. You might feel easily exhausted and the need to sleep will increase rapidly. These signs might take a few months to show up after acquiring the HIV virus. The immune system slowly starts to deteriorate further making a body more susceptible to pain and fatigue.

Both Sore throat and Headache appear as symptoms in a newly captured HIV. It is advised that during this seroconversion period an individual should get himself get tested for HIV before it turns into something worse.

Note: During this period it is a possibility that your body hasn’t produced any antibodies so even if you go through the antibody test, the test won’t be able to pick up the infection. It is recommended that an individual should go under a viral RNA test which is undertaken within 9 days of acquiring the infection.

Skin rashes is a tricky symptom as it can occur in the earlier stages of HIV or either in the later stage of HIV. Skin rashes can appear in the form of boils, or an itchy pink area around the arms. You can use some creams or contact a doctor for the treatment of skin rash but in case the skin rashes are permanent then a visit to get yourself tested for HIV is advised.

Rapid weight loss is another sign that an individual might have an HIV. Since weight loss doesn’t occur in the primary stages of HIV, the symptom is also recognized as AIDS Wasting. Weight loss happens when HIV has converted into more severe form i.e. AIDS. The immune system starts to deplete itself and which is why it is not able to back up the body. Weight loss presents itself late and no matter how much an individual infected with HIV eats, the body does not accept it.

Weight loss is followed by diarrhoea, fever and also weakness continuing till 30 days straight. It is recommended that when this pair of symptoms show up then a doctor consult becomes necessary followed by an HIV test.

Dry cough occurs in the primary stage of HIV and sometimes can be neglected easily. Even if you try to treat it with normal medications, the symptom would become recurring further telling you that something is wrong. It is advised that after weeks of dry cough which is incurable by normal medications should be checked with a doctor. An HIV test is a must.

Weight Loss and dry cough can also trigger other serious infections as well which are easy to enter a body i.e. with a germ. In case the immunity system is working properly then the germ does not become a problem but in case the immunity is corrupted, the vaguest germ causes opportunistic infections like Pneumonia.

Another opportunistic infection is toxoplasmosis which is a parasite affecting the brain and the virus causing it is known as cytomegalovirus (kind of herpes virus). Another infection can be a yeast infection like thrush.

Confusion or lack of concentration

Apart from physical symptoms there are lot of physiological changes as well that affect an individual greatly. Few cognitive problems are a sign of HIV infection in the body. Lack of concentration and confusion are few of the surface psychological symptoms caused by HIV.

HIV which has progressed to its later stage might appear in form of weakness or tingling. Few fingers can become numb or there can be tingling in any part of the body. This condition is also known as peripheral neuropathy which also occurs in diabetic patients. Neuropathic pain is also caused by stress and depression. In case symptoms like these occur, neglection is not an options. Do consult a doctor for the treatment or get yourself checked for an HIV test.

Symptoms like these can occur in the very first stage of HIV or in the later stage of HIV as well, called as AIDS. Consult a doctor and get pursue a treatment because yes HIV is not curable but if treated on time the disease disastrous effects can be controlled. Stay healthy and stay put!